Did We Evolve Into Birds? No!

It is scientifically impossible for a dinosaur to have evolved into a bird. There are too many major changes required in structure, design and function for this to happen and the organism survive. It is also impossible based on the Bible stating that land animals reproduce after their kind. Land animals (Genesis 1:24-25) are a different kind from flying things (Genesis 1:20). One kind can never become a second, different kind.

Then why do we see dinosaur fossils with feathers? Answer: we don't. They are birds. But, would there be a problem if a dinosaur with feathers were found? No. Feathers do not define birds. It would still be a dinosaur. Feathers would not mean one of us was becoming a bird. They would still be a dinosaur, or possibly a mosaic animal (such as a platypus) depending on other characteristics. 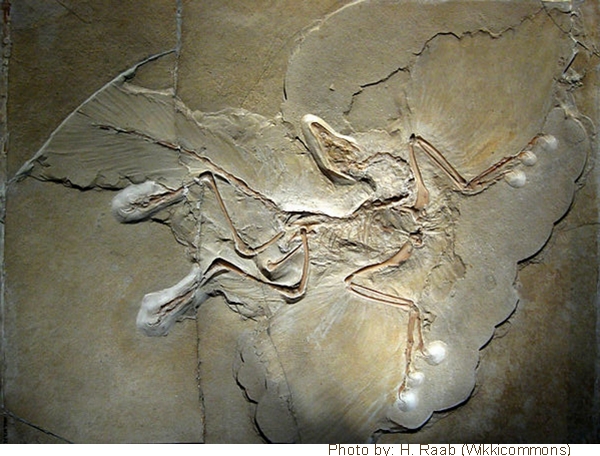 Time for you to break out of the box. Who created the classes of animals: mammals, birds, fish, reptiles, amphibians, and arthopods? We dinosaurs are considered to be reptiles. So who created these categories? God? No. These are manmade categories. Is God, in creating life, limited to these categories? No. God is not limited by what you humans imagine. That's why there are animals that don't fit in your human devised classification system, such as the platypus, pronghorn, and red panda. (More on mosaics). The archaeopteryx fossil pictured above is often claimed as a transitional fossil showing a dinosaur becoming a bird, but upon examination it is a a bird, or at best a mosaic. (More information on archaeopteryx)

What is the evidence we evolved into birds? Quill knobs for feathers have been found on fossils of Dakotarraptor dinosaurs. Quill knobs are the point where feathres are anchored to bone. Thus this is evidence they had feathers.

A good place to begin is by finding out what actually was found. There were no feathers found, just six tiny bumps grouped together on a bone. When compared with actual quill knobs, these bumps were too small and too smooth to be quill knobs. These types of bumps have been found on multiple dinosaur bones and threy are generally spaced too irregularly to be quill knobs (actual quill knobs are evenluy spaced), and some are even facing in the wrong direction. The evidence points to these being attachment points for tendinous sheets or other structures, not feathers. More information

When you look at the evidence, all of the evidence, there is nothing that supports our having had feathers. It is simply wishful thinking. A fantacy.